Skip to content
January 14, 2015 Posted in Uncategorized
Bet you thought you would never see those words
on my blog
But its’s true
at least for right now.
Hopefully in about a month we will move over to the
RV sites that are being built which
are across from the Admin Building, the Guard Shack
and the main entrance to GUMI.
Back to  where we are now….
…After a run to the store to buy
cat & dog food, some groceries
and a couple of things to level the rig
this is what we did,
well what Ron did
…you see our levelers won’t go down,
so we have to try the next thing 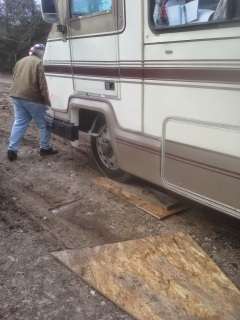 and then we check the level 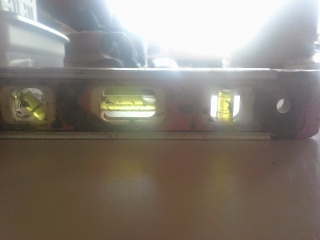 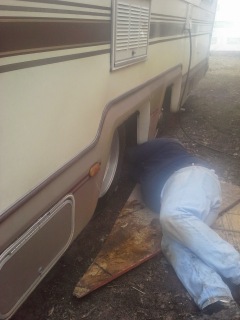 and now we are level,
well as close to level as we are going to get today
and today that is good enough!
After Ron got us level
he put our awning out and secured it.
Because we are on dirt,
we wanted to make an area
that is covered so we don’t have to stand in the rain
going in/out of the rig.
We are going to get an area rug
for outside so that we can put a tote outside
with our shoes and slippers in it
along with our lawn chairs
so we won’t be dragging lots of dirt (or mud)
into the rig.
(I will get outside pictures tomorrow)
After getting that all done, Ron headed off to feed the cows,
get water for the animals
and feed the kittens and Winnie (the dog)
While Ron was busy with the outside stuff
I worked on the inside
sorry about the sun coming in the windows
but you get the idea
since we don’t have satellite or cable out here
there is no need to put the TV down
so it works real nice to put the fireplace up on the dog house.

See that plant in the bottom left corner of this picture
I have since moved it into the corner behind the bears
…going to see how it does in that corner.
Moved it because it was awkward to get around the kitchen. 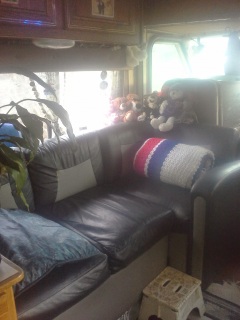 The blue light/ring is our new clock,
it glows in the dark and makes a great night light.
I did move the printer off the passenger seat and set it up
in the living room where it is easier  to access it.
I did put my bamboo plant in the corner behind the
printer and in front of the window.
It is leaning a bit so I need to figure out how to
make it stand straight.
Ron says he will make me a board to go across the dresser
that holds my craft stuff for the printer and bamboo
to sit on and be level.

We don’t use the table that comes from the wall
as it takes up way too much room so I now use a
TV tray as a table for my laptop.
Here is the plant behind the bears…
not sure if it is going to work or not.

Another view of the passenger seat with the babies,
I now have three!!

The kitchen sink area…needed to wash up the dishes from dinner
but you can see how close the cabin is to the rig out
that window.
Thankfully the cabin is just sitting there and not being used
right now. 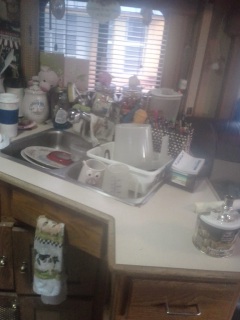 This is looking from the living room
down to the bedroom.
I put my Christmas cactus on top of the toaster oven.
You can’t see it very well but on the counter to the right
of the toaster oven is our salt lamp
…it makes a beautiful night light.
And yes, there is still a strand of Christmas lights
up in the kitchen area,
they make a nice night light too.

And once again,
our bed is ready for us.
We had to move it back onto the
base as it kind of slipped last night
with the tilt we had. 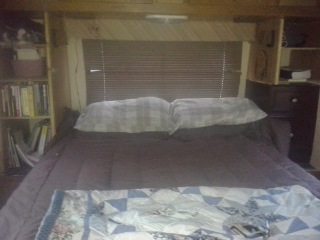 This is opposite the bed.
I used the little contact stick ’ems to hang my
bracelets…it works pretty well.

The bathroom
is finally getting organized.

Close up of my earring holder that Ron made me.
It is a sheet of plastic canvas between two boards
and then screwed to the wall.
Works great!!!

Hope you enjoyed this little tour of our home on wheels.
It feels great to be settled once again!
And as they say…
for tonight…will write more tomorrow.

2 thoughts on “And Now We are Settled!!”