Skip to content
September 29, 2013 Posted in Uncategorized
On one of our recent days off we decided to head out to Silver Dollar City for the Harvest Festival.
Lots of things to do.
First up was watching the this kind ole’ gentleman
as he worked on readying logs for a new home on site.
Ron was overheard saying to no one in particular
“I wish my beard would grow like that.”  Hmmm, this wife says “No.”

As we were walking around we saw this dapper gentleman wandering the grounds.

I wish I had my camera out, because Miss Tilly (in the red dress) sat on Ron’s lap.
You should have seen the smile on his face.
After the show as he walked up to her, Miss Tilly said, “Santa.  I want a horse for Christmas.”  Santa, aka Ron, asked if she had been good.  “Hmmm.  No.” She replied.
Here are the girls in action.
//www.youtube.com/get_player
Afterwards we decided to check out the Trick Riders.
We were a bit disappointed that
most of the acts were done on the ground with just a few horse/rider exhibits.

Here is one of them in action.
//www.youtube.com/get_player
Ron was drooling over the pork rinds so I stopped and bought him a bag.
Here we are at different times playing with the camera.
Ron’s favorite picture is the one with me laying my head on his shoulder.
I like the one of the two of us, second row, far right. 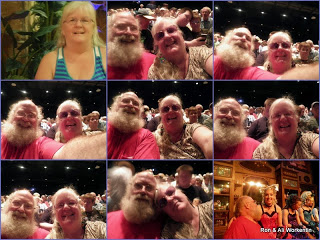 We had a lot of fun that day and plan to go back again soon.