First off, I have to start with a special blessing we had today.

I got to Skype with this sweet momma and baby 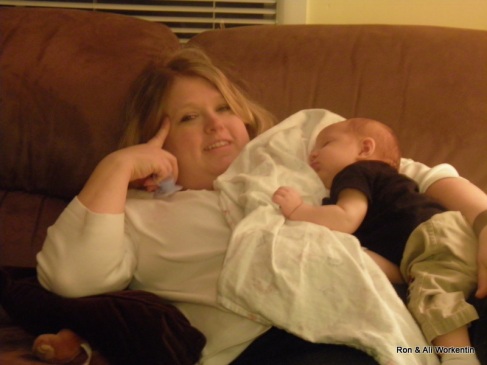 And these two pumpkins 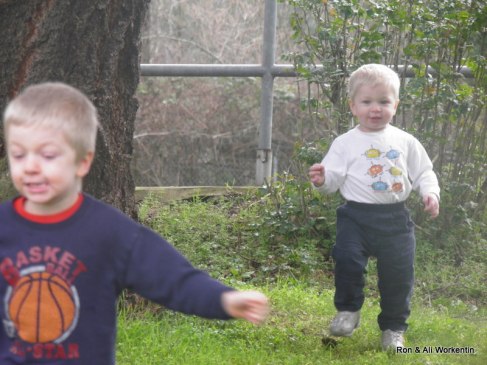 And then once Grandpa got home he got to Skype with them too!!!

We heard about Christopher saving up his money to buy a special sprinkler ~ it has like 10 points that shoot water all over and because it is so warm there in Clackamas today (85′) and now that all the boys are awake from their naps they get to go play in the sprinkler…guess Grammy & Grandpa will have to wait for another day to see those sweet boys again.  We are always thankful for our blessings.

Last week on Ron’s three days off we ~ can you guess ??? that’s right

Went for a Drive.  This time to Oklahoma.

It was a 6 hour drive but we were probably at most 75 miles from our home on wheels.

I took over 70 pictures, but fortunately for y’all I put them into collages 🙂 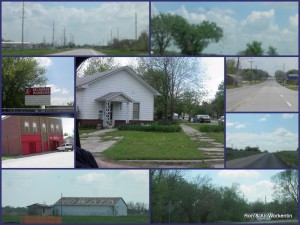 We started out going to Oklahoma to get gas.  It is 20 cents a gallon cheaper 🙂  This is a little town we came upon.  The sign in the second picture down on the left side represents their school mascot and then we saw this cool grocery store. And a sweet little home.  As you can see the sky was filled with lots of blue and white puffy clouds. 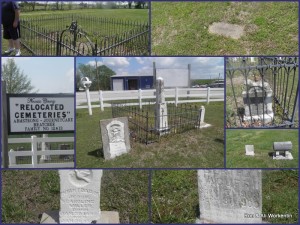 We like to go to old cemeteries and we saw this sign for “Relocated Cemeteries” so we wandered through.  One of the oldest markers was from the mid 1800’s.  Lots of babies 😦 and one of a mom and her four little ones lost over a period of 5 years.  The one in the 2nd picture down on the right side was in a family plot and this was for a newborn, I think he lived 3 days.  The 3rd one down on the right was quite interesting.  It had the marker then next to it was the round stone that had etchings of farm life, trees, a spring and field of grain. 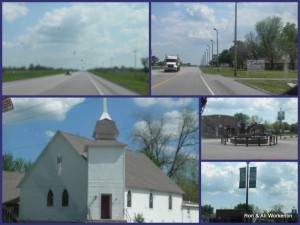 As we continued we came into the town where Will Rogers was born.  The 2nd picture down on the right is there town square and this is in the center where all four roads meet.  Loved the simplicity of the Methodist church and the street sign. 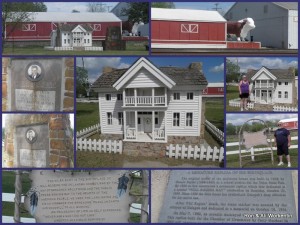 On the main thorough fare is a replica of Will Roger’s home, a sign welcoming people to the town and the story of Will’s life and career.  The red barn and white face cow are behind the replica of the home. And see we were really there! 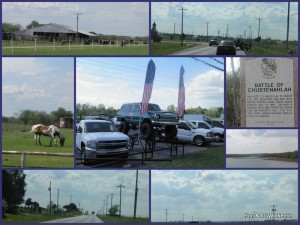 As we continued on our drive we saw this roadside sign of one of the many battles in the area.  Ron had to show me the Jeep in the center picture – he wants to do that to our Jeep ~ ummm…don’t think so I already have a hard enough time getting into the Jeep 🙂  Along with more pictures of the surrounding area. 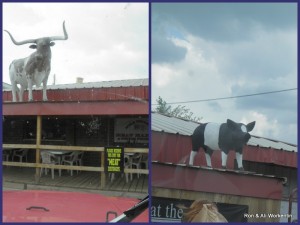 I love hominy and there was a sign to Hominy, OK so I said “Let’s Go”  We found this little meat market and so went inside.  Ron has been looking for Head Cheese since we left Branson, but alas we still have not found any.  We did pick up some nice looking bacon (and we had some the other day and it was quite tasty) along with a nice rump roast.

Which is what I made for dinner tonight (Monday, 5/6).  It was very tasty and we have plenty left for two or three more meals. 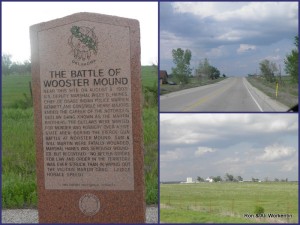 Another road sign of another battle.  And do you see the clouds forming there.  We decided we had better head for home.

After being home about 45 minutes the skies got dark, the thunder started rolling and the next day we had SNOW, yes snow in May in Kansas!!!  We couldn’t believe it.  I tried to take pictures through the window of the rig but as you can see they aren’t very clear through the screens.  I opened the door at one point to take a picture but the snow is not really showing up. 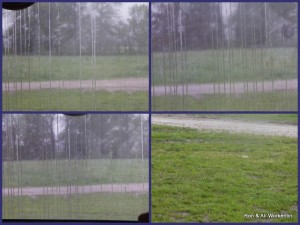 I had a friend who posted this picture on my Facebook page and said if I saw her I had better run for cover…let’s hope I never see her 🙂  Because we all now about that nasty tornado that came through Kansas after she was seen. 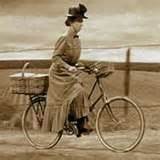 Hope you enjoyed our little trip.

2 thoughts on “Oh the Little Things that Bring Us Joy”